Petrochemicals extensively used in the automotive sector are bracing for a deeper industry downturn as consumer priorities change amid a pandemic-induced global recession.

With the global economy facing the worst recession amid massive lockdowns since the Great Depression of the 1930s, buying new cars would be the last thing on people's minds.

The automotive industry is a major global consumer of petrochemicals, which account for more than a third of the raw material costs of an average vehicle.

“Global auto demand and production are struggling. However, the impact on petrochemicals might vary among the countries due to the demand-supply structure of auto industry,” ICIS analyst Anne Sun said.

Topping the list of petrochemicals that will take further hammering are synthetic rubbers such as styrene butadiene rubber (SBR) and polybutadiene rubber (PBR), which go into the production of tyres for the automotive industry; and acrylonitrile butadiene rubber (NBR) which goes into car parts and components including seals, grommets, gaskets, and transmission belts.

“Synthetic rubbers might take the strongest hit by the slowdown of auto industry, especially SBR,” ICIS’ Sun said, citing that 70% of SBR goes into the tyre industry.

Spot trades in the rubber markets in Asia came to standstill in April as most economies are under lockdown, while supply of feedstock BD in the region continued to mount as the collapse in demand was worse in Europe and the US.

“There are no enquiries for synthetic rubber due to the coronavirus pandemic. Demand has collapsed as major tyre and automakers have cut or shutter their facilities in their locations worldwide,” a rubber trader said.

In the spot BD market, more Japan-origin cargoes are available and the oversupply in the region further aggravated by an expected influx of deep-sea material from the west.

“Demand for BD has vanished due to the coronavirus pandemic which has suppressed demand for synthetic rubber,” a producer said.

For PP, the auto industry accounts for 10% of global demand, according to ICIS data.

“That’s a big loss of PP demand. It’s a similar picture in polycarbonate and ABS. I think we will see negative growth in polycarbonate (PC) and ABS in 2020 over 2019,” ICIS senior Asia analyst John Richardson said. 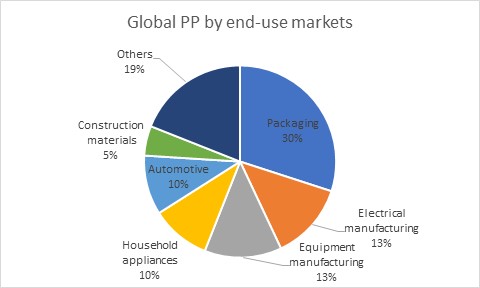 Lockdowns across southeast Asia have put a severe dent on PP demand. Some market players in Indonesia estimated a 30-40% decline in PP consumption from the automotive sector.

Richardson said that overall global PP consumption this year, however, may be saved from contraction due to stronger packaging demand for injection and film grades, and for non-woven grades that go into face masks.

For ABS, the automobile industry accounts for about 11% of total consumption, while the sector's share to total PS demand is considered low, according to ICIS analyst Jimmy Zhang.

Some form of substitution by ABS of other plastics due to better properties and competitive prices could make up for some demand loss, he said.

As most of the world's population forced to stay home to contain the pandemic, all manners of transportation have been largely curtailed, hitting demand for base oils and downstream finished lubricants.

“Securing [base oils] cargoes is the last thing on our minds,” an India buyer said, as people are still getting to terms with the mayhem caused by the sudden lockdown.  India’s lockdown was extended until 3 May.

For polybutylene terephthalate (PBT), demand was depressed by shutdowns of car manufacturing plants in China, prompting producers to cut output.

The average operating rate of Chinese PBT plants has fallen below 40% in mid-April from 40-50% in March.

LOCKDOWNS AGGRAVATE AUTO SLUMP     Latest data in key automotive hubs in northeast Asia and India indicated heavy production disruptions amid lockdowns, which may not be lifted so soon as the global tally for coronavirus infection as well as its death continued to rise.

China - which is the world’s biggest auto market - relies more on domestic consumption, with the share of exports to total production at only 3-4%, putting it in a better position compared with Germany, South Korea and Japan when the effects of the pandemic start to ease, ICIS analyst Sun said.

March vehicle sales and production in the world's second-biggest economy posted sharp improvements from February, when all economic activity virtually came to a halt due to draconian coronavirus-containment measures.

The coronavirus pandemic started in the Chinese central city of Wuhan in late December 2019 and has since spread globally, with the US and Europe now as its epicentres.

In Japan, new registration-sales of passenger cars in the first quarter declined by 10.2% year on year to 1.37m units, industry data showed. Latest data on motor vehicle production in January showed a 3.5% year-on-year decline to 762,315 units.

Toyota, the country's largest automaker, announced on Thursday that it will adjust down production in view of decline in global demand and as its expects delivery of some parts from overseas to be affected amid the pandemic.

The company will effectively cut production of finished vehicles in Japan by 40% in May, according to newswire Reuters.

Production slumped in February “mainly to the shortage of auto parts from China and the temporary shutdown of production lines due to the coronavirus outbreak”, South Korea's Ministry of Trade, Industry and Energy (MOTIE) stated.

In India, passenger vehicle production in March plunged 38.1% year on year to 207,196 units and domestic sales slumped 51% to 143,014 units, hit by the pandemic-induced nationwide lockdown that started in the last week of the month.

The lockdown in the world’s second most populous country was extended until 3 May from 14 April.

The Indian automobile industry is losing an estimated rupees (Rs) 23bn ($300m) a day in production turnover amid plant closures during lockdown, according to the Society of Indian Automobile Manufacturers (SIAM).

“There is a possibility of a rebound of vehicle sales volume in the second half of the year because people are more likely to avoid taking the public transportation considering the coronavirus,” ICIS’ Sun said.

But with the health crisis of an unprecedented scale continuing to wreak havoc on economies across the globe, and the inevitable consequence of massive job losses, it may be premature to hope for a meaningful  industry recovery in the near term.

Reprinted statement: This article is reprinted from other website, which only represents the opinions of the author and it does not represent the stand of this website. Please notify if violating the original author's copyright and we will remove it immediately.